Today, Wireless Network has become more and more present in open area or large companies and security enhancement is needed to control authentication and confidentiality. The 802.11 Working Group introduced the 802.11i amendment as the final stage of the Robust Security Network standard, superseded the old WEP technology.

Today we’ll show you a detailed step by step tutorial which explains how you can connect to a Wi-Fi network in Kali Linux from terminal.

The first step is to find the available wireless adapters which you can easily list out all by typing the following command:

iw is a new nl80211 based CLI configuration utility for wireless devices. It supports all new drivers that have been added to the kernel recently. The old tool iwconfig, which uses Wireless Extensions interface, is deprecated and it’s strongly recommended to switch to iw and nl80211.

From above output, it seems that we’ve only single wireless adapter whose interface name is “wlan0” and designated as phy#0 and of type managed  (means the device is a Wi-Fi station or client that connects to an access point) and hardware address (Mac Address) is 42:97:d7:db:b7:ef.

Alternatively, you can also find out all the above things by typing “iwconfig“.

Next step is to check the device status whether your wireless device is UP or DOWN by typing the following command:

ip is used to show / manipulate routing, devices, policy routing and tunnels. It is used for enabling/disabling devices and it helps you to find general networking information.

Use the following command to bring up the wifi interface i.e. wlan0:

Now confirm the same by typing, “sudo ip link show wlan0” to check the status, and now it shows UP 🙂

You can also check the WiFi network connection status by typing “iw wlan0 link” which shows Not Connected at this time, because we didn’t connect yet.

Next step is to scan all WiFi networks near by your adapter by typing the following command: 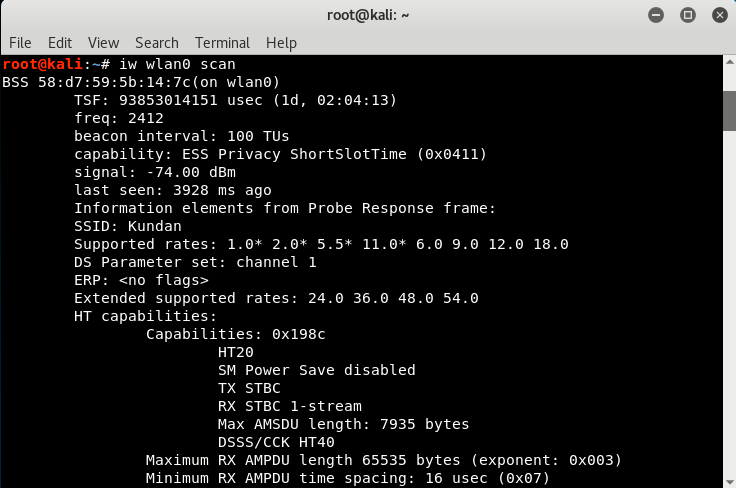 In below screen, as you can see that the SSID name is “Yeahhub” which we need to connect and the security protocol is RSN, also commonly referred to as WPA2 Protocol. 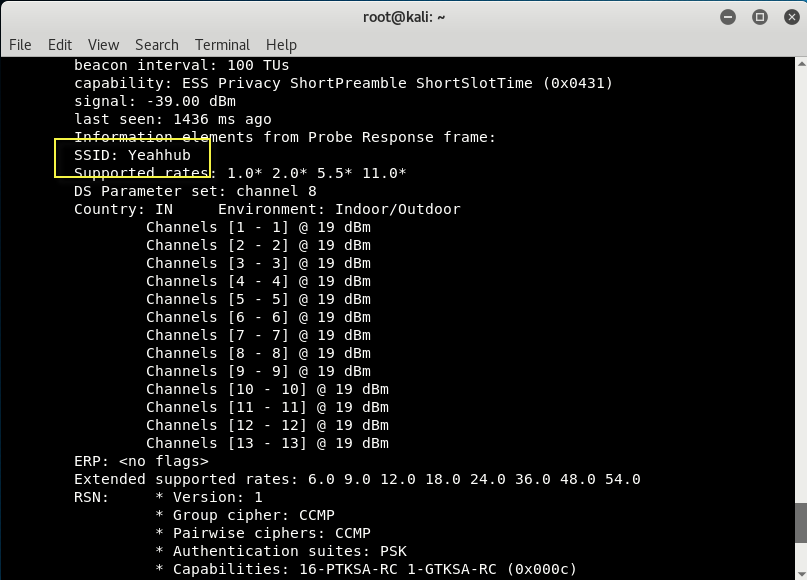 Now we’ve the configuration file, SSID name, we can use it to connect the wifi network using wpa_supplicant command as shown below:

wpa_supplicant is a WPA Supplicant for Linux, BSD, Mac OS X, and Windows with support for WPA and WPA2 (IEEE 802.11i / RSN). It is suitable for both desktop/laptop computers and embedded systems. Supplicant is the IEEE 802.1X/WPA component that is used in the client stations. It implements key negotiation with a WPA Authenticator and it controls the roaming and IEEE 802.11 authentication/association of the wlan driver.

Use the iw command to verify that you are connected to same SSID or not. 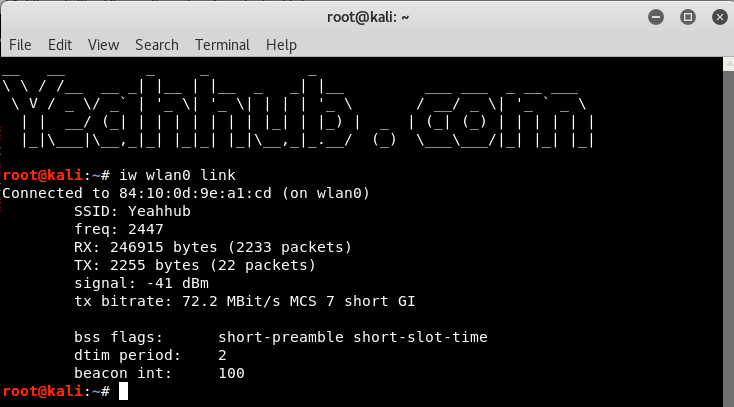 If in case, you aren’t getting any IP Address, then you can easily get it via “dhclient wlan0” command.

You can also confirm it by typing “ifconfig wlan0“.

The last configuration step is to make sure that you have the proper routing rules which you can confirm by typing “ip route show“.

Now Ping Google’s Public DNS IP to check the network connectivity or simply you can browse any website.

In case, if you are getting some problem/error then you can set routing manually by typing “ip route add default via 192.168.43.1 dev wlan0”

One thought on “Connect Wi-Fi Network From Terminal – Kali Linux”