Among common internet connections, satellite internet is still popular among rural dwellers. The reason is that there is still no infrastructure, which can facilitate people with high-speed internet. When talking about the internet, we all know how good it is for streaming, gaming, and download – but only if you have a cable, DSL, or fiber connection.

Our daily activities are all dependent on the internet and gaming is one of them. The majority of gamers prefer high-speed internet with a minimum speed of 100Mbps along with unlimited data caps and a low latency rate. However, it is only possible if they are living in an urban area, and plenty of service providers are available.

When it comes to satellite internet, things are not as pleasing as they might be in the case of cable, fiber, or DSL internet. Among gamers, satellite internet would be their least preferred connection as there are limited data caps and a high latency rate.

In this post, we are going to discuss whether or not satellite internet is good for gaming and also discuss the issues. Let’s get started.

Some of the satellite providers have made quite impressive progress when it comes to improving technology and other deficiencies as compared to other connections. For instance, HughesNet has invested more in improving its infrastructure and technology. Apart from improving its infrastructure, it has also improved its customer support to provide timely assistance and facilitate customers. You can check it yourself by visiting hughesnet teléfono servicio al cliente.

Moreover, some new providers are also making their name when it comes to satellite internet such as Starlink and SpaceX. Both of them are delivering optimal speeds and low latency.

Now let’s find out how good is satellite internet when it comes to gaming. Here’s what you need to know.

Satellite internet is not very ideal when it comes to gaming. For instance, if you are competing on Call of Duty, you will come to know a huge lag such as when you shoot your enemy, the person might not die instantly. Similarly, when moving forward or deploying weapons, you will find a huge lag and things might not be as smooth as you may experience when gaming on DSL, fiber, or cable internet.

It is unfortunate for urban dwellers to experience such kind of competitive gaming. However, many service providers are coming forward with reduced latency, but not as much as that of any other connection.

Latency will drastically disrupt online gaming, which includes many popular ones such as Rocket League, Tekken 7, Call of Duty, and PubG. If you are a hardcore gamer, it is not good to play competitive games as it might put you in shame in front of other gamers’ communities.

Passing your free time playing casual games is quite satisfying. Requires a very short span, these games can improve your strategy and thinking capacity. For instance, if you are playing chess against a computer or any other person online, you will feel challenged at various points. And that too goes for the poker and card games that require attention to minute details.

All of the casual games that require little to no speed are good to play on satellite internet. In any instance, it does not require quick gestures and actions. They don’t require twitch skills, which means if the latency rate of satellite internet is high, it would be able to handle casual gaming.

If you are playing games that were popular in the early 90s such as Cadillac and Dinosaurs, Final Fight, Street Fighter 2, and Pacman, you won’t find trouble keeping up with the game. As most of the satellite providers are also offering speeds up to 100Mbps, which can be helpful in not only playing games but also download heavy files. But you need to keep one thing in mind that data caps are equally important as download speed and latency rate. For instance, if you are only given 10 GB per month, you won’t be able to do much of the activities side by side with gaming.

When it comes to competitive gaming, you can’t settle for the least. As most of the new satellite providers are stepping in to provide as much as 100Mbps, you should be ready to pay your money is huge. 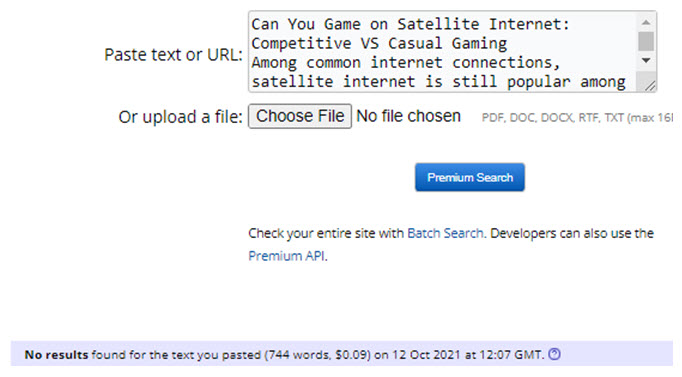 At the root of a company’s infrastructure is an essential yet often overlooked piece: direct cloud connectivity. More than internal data stores, there are often specific networks for external and cloud-based services. The speed and agility they provide are unmatched by traditional on-premise deployments. You need to have direct connectivity with your cloud provider and […]

There are plenty of ways to make your password secure, but most people just don’t bother. It is much easier to set a password that is easy to remember, but hackers rely on this to break into insecure sites. Try to at least make it hard to guess by making it eight characters or more, […]

5 Reasons Students Should Use Antivirus Software

In the 21st century, when there is a computer or laptop in almost every house, we bet that everyone has heard about antivirus software. To say briefly, it is a special tool developed to protect your system on the inside from various external threats. Though pretty much everyone knows about it, not many actually use […]