Password is a key or a Secret word or a string of characters which is used to protect your assets or information from others in the cyber world. It is used for authentication, to prove our identity or to gain access to our own resources. It should be kept secret to prevent access by unauthorized users.

There are so many techniques are available through which bad guys so called hackers or crackers can crack your password  by means of:

In this article, we’ll demonstrate that how you can change the password forcefully by next login attempt by user in Linux OS.

To do this, there are basically two ways:

Before to do, let’s create a new user account with the help of useradd command of name “tom” whose current password is also tom.

Next run the following command which will expire the password of tom user so that the tom user will have to change his password forcefully during the next login attempt.

On other Terminal, we’re trying to login as tom user and you can see that, it’s asking to set the new password immediately. 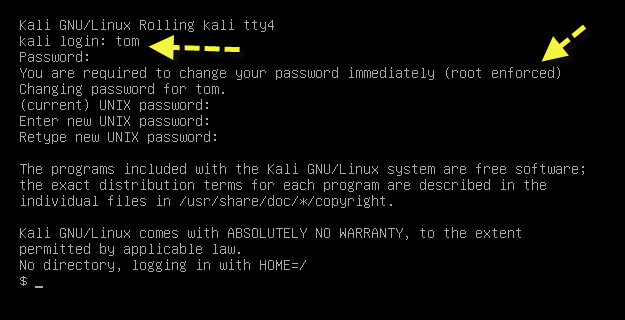 The same can also be done with chage command which stands for Change Age. Before to do, let’s create another user of name alex whose password is alex as shown below:

Next run the following command where you need to set the user’s date of last password value to 0 as shown below:

And try to login with alex user in new terminal which asks you to set the new password immediately as shown below:

Things to be remembered while creating Strong Passwords