An recent ransomware attack that affected more than 100k+ systems on Friday(12th May 2017) has spread to 90+ countries, locking doctors in the U.K. out of patient records at NHS. The attack has also reportedly hit a Spanish telecommunications company and a Russian cellphone operator.

Ransomware is a form of malware that encrypts a computer’s files and displays a message to the user, saying it will decrypt the files for a payment, typically via bitcoin. The message displaying on NHS(National Health Service) computers and others has been circulated in photos on social media, and it includes instructions to send $300 or $3000 to a bitcoin address.

Security experts say the strain of ransomware being used, called the “Wanna Decryptor” or “WannaCry” or “WCry” is exploiting a vulnerability in Microsoft Windows that was leaked last month by an anonymous hacker group calling itself the “Shadow Brokers”. The group claimed it had stolen the exploits it released from the US National Security Agency(NSA).

Those bitcoin addresses are publicly accessible, and you can view their associated wallets as victims send the hackers money in hopes of regaining access to their files.

Here are 3 of those bitcoin wallets –

We also want to thanks Kaspersky’s ransomware decrypter, through which you can easily decrypt your files free of charge.

French security researcher Kafeine was the first to notice the usage of EternalBlue in WCry, as it triggered ET rule 2024218. EternalBlue works by exploiting a vulnerability in the SMBv1 protocol to get a foothold on vulnerable machines connected online. Microsoft has patched this vulnerability in March (MS17-010), but PC owners mostly didn’t take a shit about it.

CERT Spain and other security experts confirmed seeing WCry also dropping DoublePulsar on infected systems as well. DoublePulsar is a Windows kernel Ring-0 exploit (also developed by NSA and leaked by Shadow Brokers). The payload of the exploit can be used to remotely download and install other malware on the infected machine.

WCrypt has infected a total of 220,000 machines at the time of writing this. MalwareTechBlog has put together a handy WCry infection map updating every minute.

The spread of WCry has been stopped after MalwareTechBlog has registered a hardcoded domain included in the ransomware’s source code. WCry checked this domain before it has started it’s execution. If it was unregistered, it would execute. If it wasn’t, it would stop spreading, acting like a kill switch. Cisco Talos has confirmed the information.

If you are still paranoid, what you can do to protect you is INSTALL THE UPDATES. Turning the automatic updates off in this world of ransomware is the worst thing you can ever do to your data. 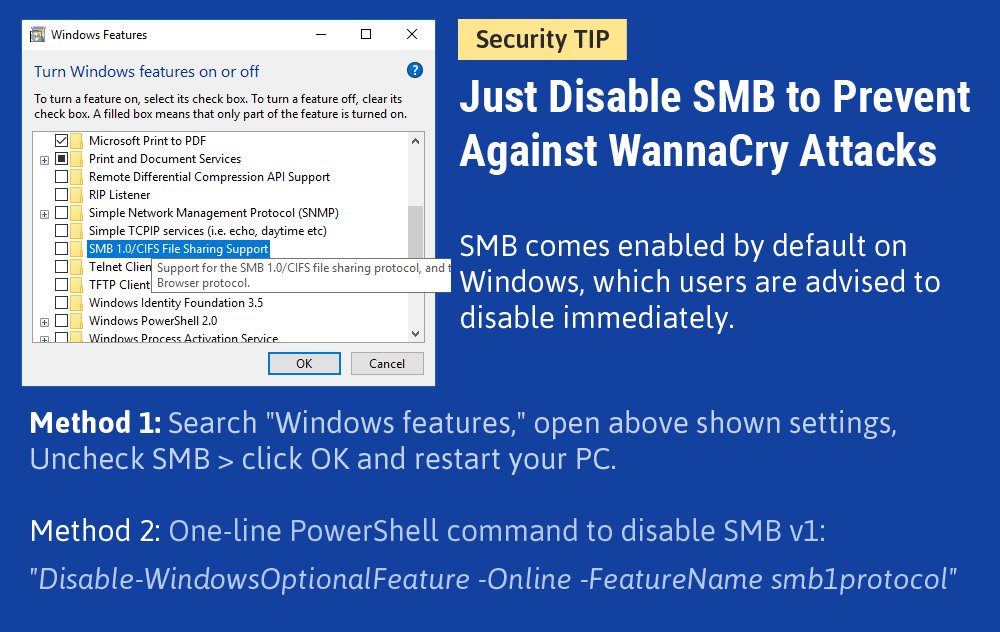