SQL injection occurs when an application processes user-provided data to create an SQL statement without first validating the input and then submits the statement to a database server for execution. When successfully exploited, SQL injection can give an attacker the means to access back-end database content, remotely execute system commands and in some circumstances, take control of the server that is hosting the database.

The specific impact depends on where the error is in the code, how easy it is to exploit the error and what access the application has to the database. Theoretically, SQL injection can occur in any type of application, but it is most commonly associated with web applications because they are most often hacked.

Replace the value of each parameter with a single quote and an SQL keyword, such as WHERE. Test each parameter individually. When testing parameters, leave all of the other parameters unchanged with valid data as their arguments.

The detection of SQL injection attacks has primarily been accomplished through pattern matching techniques against signatures and keywords known to be malicious. Until recently, this technique has been successful. Now attackers are hiding their malicious intent in a variety of ways to escape detection.

You can easily scan the SQL vulnerability on the target URL itself and all other sites on same server.

Installation of viSQL in Kali Linux –

The above command will automatically creates a folder named “viSQL” in same directory where you are running the command. To list out all the files, type “cd viSQL && ls” in your terminal.

After that, to run viSQL, just type “python viSQL.py -h” which shows the help menu of viSQL tool. 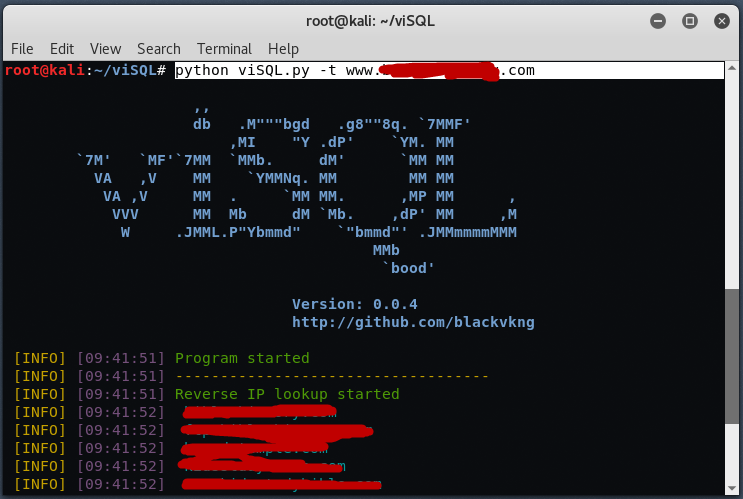 Here you can see that, viSQL started the crawling against the target website and found so many sites which may be vulnerable to SQL Injection vulnerability. 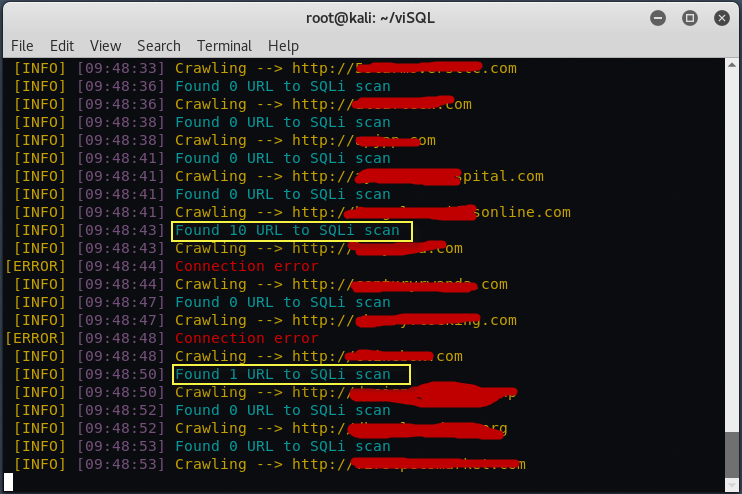 After the completion of crawling, viSQL starts the SQLi scan feature which lists all the SQL vulnerable URLs just like below.

Now collect that link, and then start doing SQL injection manually through browser or automate it using your desirable tool just like SQLMAP or HAVIJ.

SQLMAP is for Linux based users and HAVIJ is for Windows based users.

Hack a website with Ngrok, Msfvenom and Metasploit Framework

In a recent survey, only 15% of business owners saw security as a challenge when more than  half had reported being hacked and of that, only 6% of small businesses don’t have anyone handling their online security. More people have access to the internet than ever before. This has prompted many organizations to develop web-based […]

It is common knowledge that there are bad people attacking systems on the Internet, regardless of the nature of the business. As a defensive countermeasure, organizations put their trust in solutions for defense from these cyber threats. The problem with this strategy is the vendor is not the victim of an attack and doesn’t absorb […]

SQL injection is a technique, used to attack data-driven applications. Using this method, hackers will try to execute their SQL statements within your application and access your database data. Here is an example SQL injection. Let’s consider you have a login form with two fields – username (text field) and password (password field). Upon login, […]