Regardless of whether you are reading a packet capture from a stored file or from a live interface on a Windows or Linux host, Wireshark’s analysis features are nearly identical. Wireshark offers many useful features for analyzing wireless traffic, including detailed protocol dissectors, powerful display filters, customizable display properties, and the ability to decrypt wireless traffic.

Let’s start with analyzing the Deauthentication Packets/Frames with Wireshark.

Deauthentication request can be send either with aireplay-ng or with mdk3 tool. But make sure that your card must listen on same channel as the AP is operating on.

For Deauthentication with Aireplay-ng, the command is: 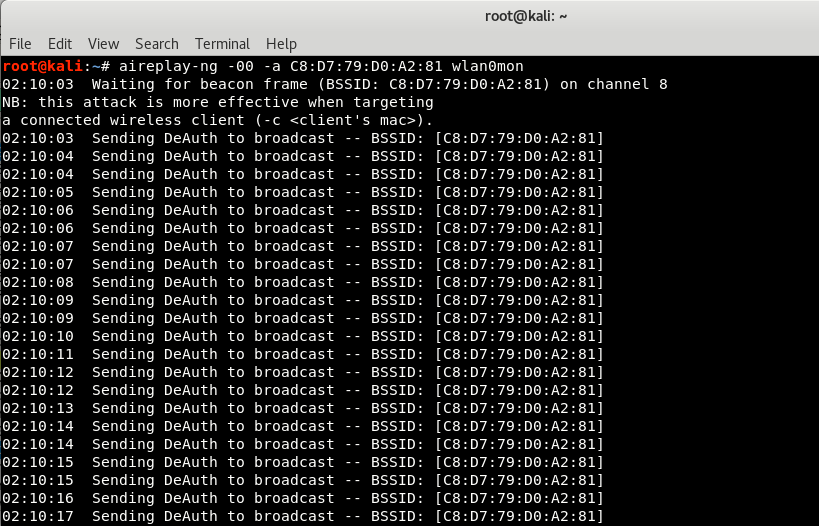 Sending a few deauth frames are enough to successfully disconnect the stations in case of performing tests and capturing handshakes. A long attack will keep the device from connecting and the end would be the device user will have to connect manually from WiFi Manager.

Wireshark is the best open-source network analyzer available. It is packed with features comparable to commercial network analyzers, and with a large, diverse collection of authors, new enhancements are continually developed.

Wireshark is a stable and useful component for all network toolkits, and new features and bug fixes are always being developed. A lot of progress has been made since the early days of Wireshark (when it was still called Ethereal); the application now performs comparably (and in some regards) better than commercial sniffing software.

One of the most powerful and useful features in Wireshark is the ability to apply inclusive or exclusive display filters to a packet capture, in order to narrow down the number of packets to those containing useful data. When capturing traffic on a wireless network, it is easy to become overwhelmed by the sheer quantity of data that is captured.

Start Wireshark by running the wireshark executable with no command line arguments as the root user, and initiate a new packet capture by pressing Capture | Options. This opens the “Wireshark Capture” options dialog box. Choose the wireless interface which is wlan0mon (in our case) that has been placed in monitor mode by selecting the drop-down box labelled “Interface:” and then specify the desired capture options.

Next, click Start to initiate the packet capture. At this point, you’ve configured your system to capture wireless traffic in monitor mode.The next step is to utilize the information contained in the packets you are capturing. Fortunately,Wireshark has sophisticated analysis mechanisms that can be used for wireless traffic analysis.

Using display filters, you can exclude uninteresting traffic to reveal useful information, or search through a large packet capture for a specific set of information.

For Filtering Deauthentication Frames, the filter is:

Here, type field of deauth frame have value 0 while subtype has the value 0x0c (12).

The Type field is included in the frame wlan.fc.type control header and specifies the type of frame (data, management, or control) whereas The Type/Subtype field value is included as a convenience mechanism to uniquely identify the type and subtype combination that is included in the header of this frame. This field is commonly used in display filters.

For example, if the frame is a type management frame, the subtype field indicates the type of management frame (e.g., a beacon frame, authenticate request, or disassociate notice).

When assessing a wireless packet capture with Wireshark, it is common to apply display filters to look for or exclude certain frames based on the IEEE 802.11 frame type and frame subtype fields.

If you are trying to exclude frames from a capture, it is easy to identify the Type and Subtype fields by navigating the Packet Details window and using the values for your filter. If you are looking for a specific frame type, however, you have to remember either the Frame Type and Subtype values, or the Combined Type/Subtype value assigned by Wireshark.

Instead of expecting you to memorize the 35+ values for different frame types, we’ve listed out here for easy reference.