OurMine Group (Saudi Arabian Hacking Group) is now back and has claimed the responsibility for the breach of Vevo which is the most popular online video streaming service.

Even Vevo.com is now not available, they’ve already put a Under Maintenance page due to this recent hacking attempt by OurMine Group.

In starting phase, One of the Vevo employee is denying this attack and see what he said: 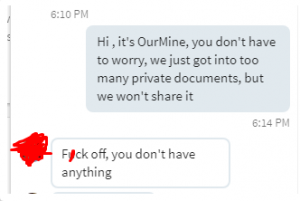 OurMine managed to get hold of Vevo’s sensitive data which includes “internal office documents“, “videos” and “promotional materials” which they’ve already published it online and OurMine removed all the stolen information from its website on Vevo’s request.

This breach was first reported by Dell Cameron of Gizmodo, who said the leaked Vevo content seems “pretty mild,” which contained “weekly music charts, pre-planned social media content, and various details about the artists under the record companies’ management.”

In last few weeks, this OurMine Group already hacked so many other big companies and high profile figures like WikiLeaks, HBO, WWE and Netflix.