These days, wireless networks are everywhere. With users being on the go like never before, having to remain stationary because of having to plug into an Ethernet cable to gain Internet access is not feasible. For this convenience, there is a price to be paid; wireless connections are not as secure as Ethernet connections. In this tutorial, we will explore a new method for cracking WPA/WPA2 networks with an open source python script wifibroot.

WifiBroot is an extensive tool which helps you to crack WPA and WPA2-PSK based wireless networks and is still under development.

You can WifiBroot tool with the help of git by typing the following command:

WiFiBroot heavily depends on scapy. So, you would need scapy installed. Almost, every other library would likely be installed on your system. To install scapy, you can use the following command:

Before to run WifiBroot, make sure that your wireless interface(wlan0) must be in Monitor Mode(wlan0mon) which you can easily done with airmon-ng start <wireless interface> command. So in our case, it is wlan0mon which we’ll use in further commands.

For more info, you can directly type “python wifibroot –help”

Based on your choice, (Press CTRL+C to stop the monitoring), and simply select the wireless network from the list which you want to crack as shown below:

After that, it will automatically searches for all connected clients for handshake generation and the script will listen for default 20 seconds which you can further set the timeout option for listening on the clients with -t <value>.

And the best thing about WifiBroot is that, the script will automatically arrange all the connected clients based on the range reported by the interface which actually increase the chances of generating handshake in less time.

For research facilities, verbose mode will show you live packets as soon as they get captured and will print hexdump of computed hashes. The hashes will include, PMK (Pairwise Master Key), PTK (Pairwise Transient Key) and MIC (Message Integrity Code).

To Crack the password, there is a built-in dictionary in the folder dicts (as already discussed) which contain some of the most dumb passwords. In extension to that, wifibroot also check for default passwords which increase it’s credibility of finding the right hash.

At this stage, you can provide your own dictionary or pass a comma separated string to -p argument like  -p “password1,password2,password3”.

Look at the below screenshot:

As soon as it identifies all connected clients, it will automatically send the deauth signal to all clients one by one until it generates the successful handshake. After successful handshake generation, the script will automatically tries to bruteforce based on the dictionary value (provided in 1st step) and gets you the password in clear text manner along with some computed Hash values(PMK, KCK and MIC) as shown below: 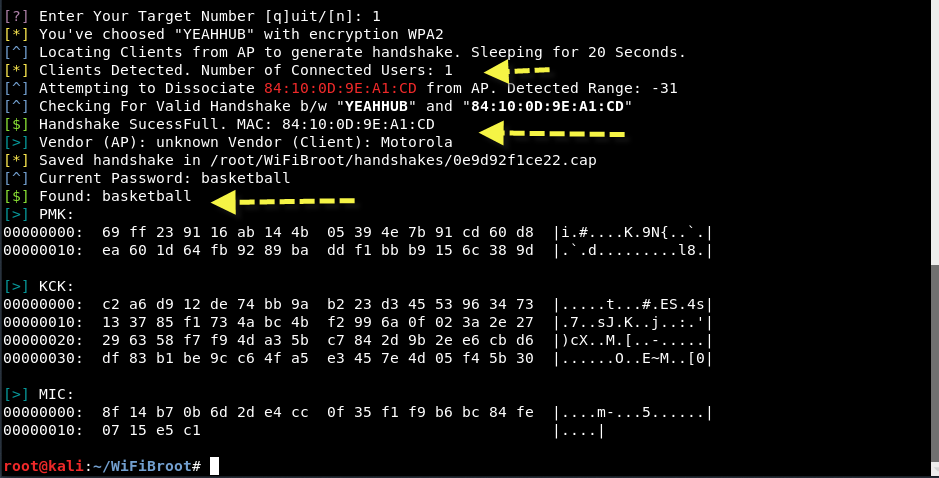 All the handshakes for particular wireless network will be stored in a separate directory which will eliminate the requirement for handshake generation for future attempts as shown below: